Before I was a runner, I was a keen walker. I walked everywhere and would travel for miles to find a good bushwalk. (I think we can now see why I took to trail running so naturally). For many years I had a dream of walking the entire Heysen Trail, or walking the entire coast of Australia. I would plan them in my head, but they never came to fruition because I was working, or having babies, or was out of money. As I’ve become a runner, these dreams have transposed into dreams of running them. I have done sections of the Heysen Trail whenever the opportunity arose, and similarly coastal sections of Australia. Now we’re travelling around the globe, I’ve set my sights on some of the world’s trails.

As a family we have been talking of doing one of the Camino De Santiago routes in northern Spain. It’s high on our list of things to do and the plan is that I’ll run ahead each day and find somewhere to stay and Cass and the kids will walk and meet me. We haven’t set a date yet, but the kids are keen and we talk about it often.

Recently we stayed in Porrua, Asturias, which is not on the Camino, but about 1km from it, and so there were a lot of opportunities to do day trips along it with the kids, and run sections on my own. As I was training for the Riaza Trail Challenge I was after some elevation so did some runs on the Camino, and some side tracks up the mountains.

The Camino in this stretch travels through the coastal towns of Llanes and Poo (yes this name doesn’t translate well into English, but it’s a beautiful town). Peregrinos (as the walkers on the trail are known) can be seen on all parts of the track and they come in various shapes and forms. Some were retirees with very small packs, some were young solo travellers enjoying the disconnect and some were more like tourists with their eyes glued to the map on their phone. The latter were usually the sort to ask you for directions, even though they were the ones with the map. 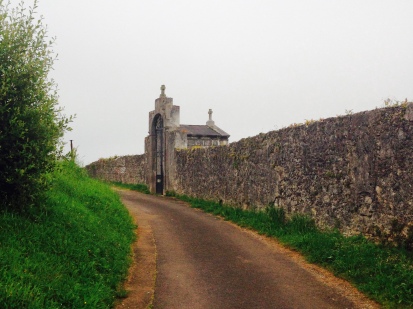 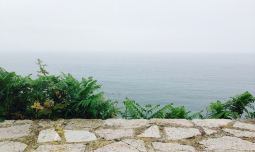 The trail winds through the rural areas between towns with occasional sweeping views of the sea. All of the towns are close together and the trail often takes the least-direct route and shows you the smaller, interesting laneways along the way as it detours to places of religious significance.

The Camino De Santiago markers are easy to spot

It’s a pleasure to run the Camino, as the route is well marked so you never have to check your map (unless you are one of the aforementioned tourist types) and it is so picturesque at every turn.

I’m glad I also took some of the side-trails as they also took me to picturesque areas where the dirt road was bordered by stone walls, and the mountains of the Picos De Europa loomed high in front of me. (The Travesera Picos De Europa run is in June for those keen on a brutally difficult mountain run).

There’s so much more of the Camino De Santiago that I want to run, but this trip definitely gave me a taste of it.